Checking the student’s video fruition is now possible with the "Video Playlist" plugin!

Get detailed information about the location and time of opening and closing: post office opening times.

How does a Tesco near me work? Opening and closing times for the supermarket: tesco express near me.

How does the ASDA that is near me work? Find out the opening and closing times: asda opening hours.

GullyBet apk- the best betting and casino app in India
If you have been looking for a way to make money for a long time, then at Woo casino you can do it today!
Зачем о чем-то мечтать, если на мостбет можно выиграть деньги и купить это?
Do you want to not only play but also win? Then at King Billy casino you can enjoy it all at once!
Stop dreaming! After all, at Katsubet casino you can make money on absolutely any of your dreams!
Do you love casinos? Then Woo casino will definitely appeal to you. Play today and see for yourself.
Who doesn't love money? Everyone loves them! Then at Winnerama casino you can earn a good amount of money.
If you have never played in a casino then Rocket Play casino you will love it right away! After all, only here you can win without much effort.
Che cos'è il Sportaza casino? Prima di tutto, questo non è solo un gioco, ma un'opportunità per guadagnare bene!
Do you like to play in the casino? Then at Wolf Winner casino you can not only enjoy the game but also win good money. Take action!
If you dreamed of playing in a casino, then for this there is Golden Crown casino where everyone will earn!
If you have been looking for the best casino for a long time then Robin Roo casino is the best option!
Bahalı şeyləri sevirsən? Ona görə də bu, çoxlu vəsait tələb edir. Yalnız mostbet.az saytında böyük məbləğdə pul qazana bilərsiniz.
Wenn Sie noch nicht bei https://n1-casino.biz/ gespielt haben, dann spielen Sie heute. Knacken Sie Ihren Jackpot!

The first version of Forma Lms follows and relaunches the abandoned open source version of Docebo.

As you may know, since February 2012 the LMS Platform "Docebo" changed from free open source to a commercial business model. Our team created a new supporto community to give the users of this great LMS a place to share knowledge and mods.


Check it out under http://www.elearningcommunity.net.


Support, patches, fixes and mods can be found there and other new features will be released soon.


Among the other open source LMS out there, Docebo is one of the most complete and "modern", in particular considering the latest version 4 released just a few moths ago.

This platform features a few unique features such as customizable user fields, powerful and customizable reporting system, a solid and flexible administration system allowing the management of multi-client and multi-template environments, native certificate management, and much more, making it really interesting especially for corporate training.


Many companies all around the world are using DoceboLMS, but not all are ready or want to shift to the new commercial license: some are just happy with the latest versions, for some other ones the migration to a new platform would just be too difficult and expensive.


Many others could still be interested in using the latest open source releases for their e-learning projects. This new "self support" community is hosted and maintained by Elearnit and a group of docebo users, developers and consultants, in order to provide all these people a meeting point and an option to keep alive the open sourcebranch of the software. The previous versions of the software until the latest 4.0.5 are still under the open source license, so they are still free to use and distribute.

If you have projects already running on Docebo until version 405, or want to keep using it for your projects under the open source model, www.elearningcommunity.net is the new place to go.

Forma Lms is an award-winning Learning Management System, used to manage and deliver online training courses.
Designed for corporate training, born to fit your company needs and processess.
Easy integration with any intranet software, extend functionalities with a wide range of plugins.

Forma is developed by a network of companies, with a strong and active community:
it's open-source, and it's FREE.

Handy for students and teachers

Specifically designed for the ease of use of students and teachers, with a modern and responsive layout.

Integrate with your videoconferencing system to create your webinars. 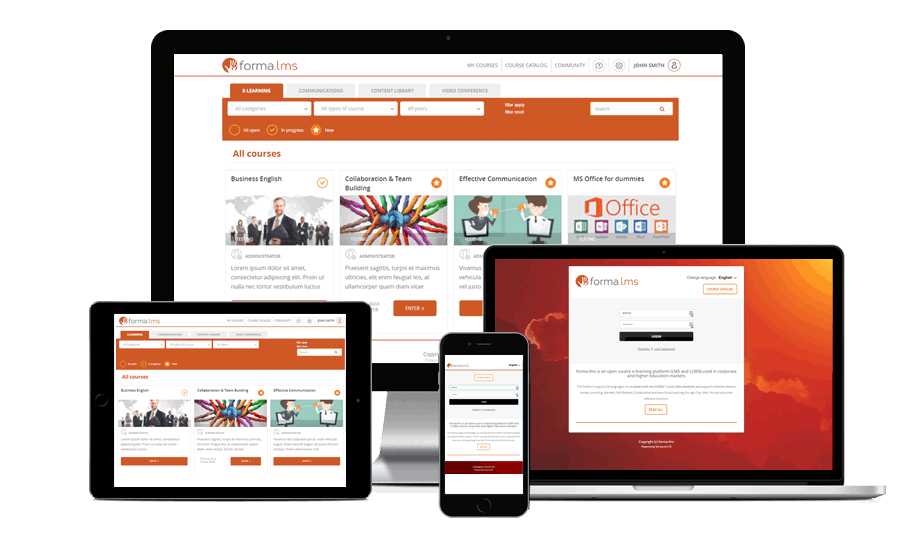 A brand new interface with modern look and feel, responsive layout and designed for an easy and engaging user experience.

Total control on the COURSES

Manage teaching, materials, courses and collaboration with a wide choice of features. Monitor activities with an advanced tracking system and SCORM compatibility.

Are you wondering "can I do this or that with forma"? Forget the limits of saas platforms and get free: here EVERYTHING IS POSSIBLE!

You won't need anything else, just a good coffe to enjoy all your free time: Forma LMS is designed to support platform administrators with lots of configuration and automation options for users and courses management, massive edit actions, and more. 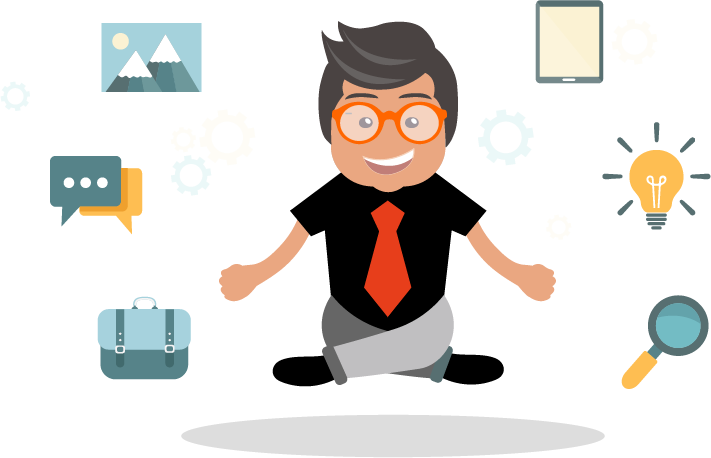 Organize your users easily by organization chart, groups or roles, manage administrators with special permissions. Import, export and modify massively many users in one click.

Organize your courses in multiple catalogs,categories and coursepaths, to offer you users different choices

Map roles and skills of your company, and check them with native skill gap analysis reports.

Let your users communicate through forums and exchange private messages

Easy to customize and integrate

Add functionalities and customize the platform with the plugin system and custom scripts.

Integrate the e-learning platform with your management software with native API and connectors.

Do you still use an old Docebo Open Source? Switch directly to Forma with a simple upgrade!

Sexual Evolution in the Arab World

The sexual revolution in the Arab World is changing rapidly. The Middle East has become a place where women are more accepted, and they are allowed to express their sexuality. This is especially true of young Muslim women who are educated and who are not under pressure from family or community to be submissive. This is a welcome development in an otherwise conservative society that values traditional gender roles, especially for wives.

When the United States military invaded Afghanistan, the first place they sent was the Arab world, especially Saudi Arabia. What happened there? It was as easy as ABC: the young, educated Saudi Arab women (Arabian قصص سكس ) saw this as an opportunity to be liberated and to be proud of themselves, and to be more assertive. They opened up to their husbands about the new freedoms they were experiencing in their relationship with the man they love. They were liberated to explore the sexuality and relationships they were opening up to.

The Islamic religious culture of the Middle East is also changing, in ways that affect women's sexuality and relationships. A woman in Saudi Arabia is expected to stay quiet, obedient, and submissive for her entire marriage. A young girl growing up in a conservative environment would be expected to live like this, but now, in a country where the religious beliefs of the past are being replaced by new ones, women are being allowed to take control of their own sexuality on this website. They are taking responsibility for their own body and are making decisions about how to create, share, and enjoy sexual experiences.

The Arab world, which is also becoming more liberal on other issues, is seeing the changes in relationships between women and men. Women in Saudi Arabia have the same rights as women in many other countries, and it is now common for women to be seen outside of the home, walking along the streets or on the beach. A woman will not feel as though she is restricted by her dress or her behavior, because she is free to go where she pleases.

But what is happening in the Middle East is no longer simply a change in attitudes toward women in the west. It is now an extension of a new revolution in the history of human sexuality - a revolution that has been called the Arab Renaissance - and this time it is changing the very nature of women's sexuality and relationships, and marriage in the Arab world.

If you were to look at the history of the Middle East, you would see the emergence of many cultures, each with its own unique form of sexuality, and the development of different concepts about sex. Even in areas like Egypt, Rome and Egypt, there were a great shift in the concept of marriage and sexuality, as well as a shift in the role of women within the household. One of the most important aspects of these changes is the evolution of the role of women in the family.

In the early Islamic religion, a woman's role within the household was to be a mother. She was not to be the sole provider and had to be the breadwinner of her family. However, with time the roles began to shift, and she became the breadwinner, as a teacher, or even doctor. This shift was not only from her position within the family to a position outside it - she became a homemaker. Women in the Muslim world are now becoming more confident in their own sexual identities and relationships with their husbands, as well as with their husbands and partners.

There are still obstacles to overcome when it comes to the acceptance of women in the Arab world, but it is changing quickly. As the Middle East becomes a more open and progressive region, and the new openness about sexuality is becoming more accepted in the Muslim world as well, we will see these changes continue. As more people recognize the importance of marriage and family, more couples will realize that they need not be confined by their religion to remain unmarried.

forma.lms is a registered trademark of the forma.association
Text contents of this website are available under the Creative Commons Attribution-ShareAlike License

Some of the cookies we use are essential for parts of the site to operate and have already been set. We also use Google Analytics scripts, which all use cookies.
You may delete or block all cookies from this site in your browser options.